From SpenchWiki
Jump to: navigation, search

This is completely open for comment, so if you have any thoughts on the quality of this Random Number Generator please contact me.

It is possible to use a USRP to generate a stream of random numbers (i.e. an entropy generator). It relies on sampling the electrical & thermal noise in the Analog-to-Digital Converter, and converting this into a random bitstream. 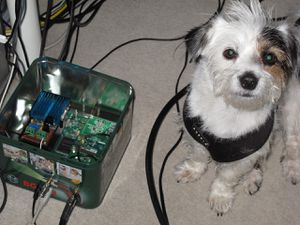 All you need is:

WARNING: The following are the results from a completely ad-hoc experiment. Do not use this technique to generate entropy that will be used for anything that requires the slightest bit of security. Sample at your own risk! If you require something more secure, please learn about some Bruce Schneier Facts.

To use the Fast Auto-correlation block, you'll need to install gr-baz. 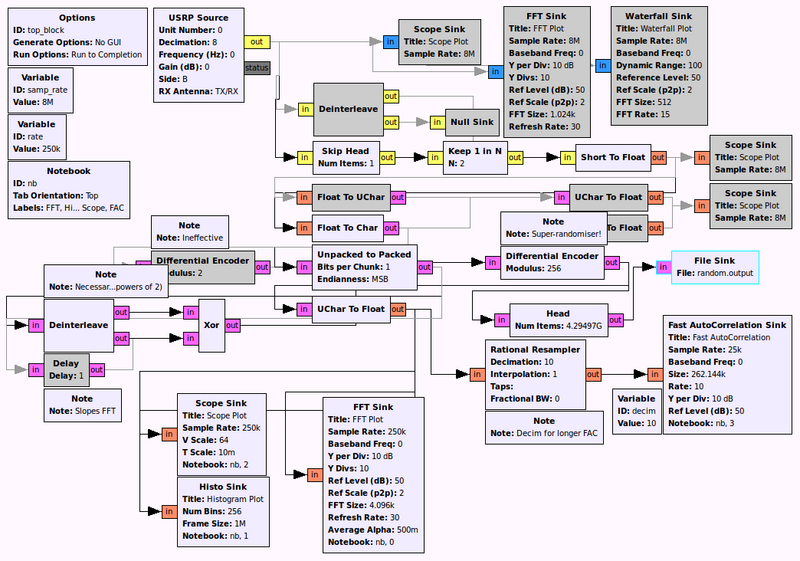 This can now be treated as the final random bitstream.

The final random bitstream appears to be 'pretty random':

Auto-correlation of random output over two second period. Even with small amplitde scale, no distinct peaks are visible suggesting there are no repeating components.

During development of the data flow, some problems were encountered.

Hint: In the following section, keep in mind that a re-packed 'noisy' byte, and a final output byte are a sequence of either binary digits that have been individually sampled earlier from the LSB of the ADC. Therefore each individual 1 or 0 can be thought of having been processed in sequence (they just happen to be packed into bytes as it is convenient, which means we look at the distribution of values between 0 and 255).

In the first iteration there was no XOR'ing or modulus applied. Even though the other analyses (above: FAC, FFT, scope) appeared uniform, the histrogram showed a slight non-uniformity. Upon closer inspection (especially in the histogram of the final output), it is clear that even numbers, and especially powers of two, are being favoured. In the 'space' between each successive occurence, one can observe an overall decrease in probability. This is clearly due to a non-uniform distrubtion of 1s and 0s in the 'noisy' byte (there is a greater chance of a 0 being selected over a 1). Also, the LSB from the raw ADC data (that is re-packed to form the 'noisy' byte) also tends to be 0 (explaining the greater amount of even numbers), which is reasonable to expect given the nature of the input signal (i.e. noise). In addition, the overall decrease in probability for higher values suggests that the more significant bits in the re-packed 'noisy' byte tend to be zero, and the less significant ones are randomly 1 or 0.

Histrogram looks roughly uniform at first glance, however there is subtle skew and certain 'special' numbers occur more frequently than others 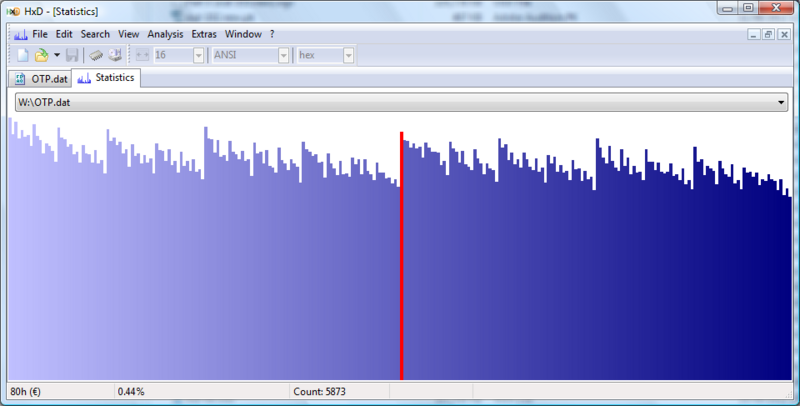 Histogram as above, but of final output bit stream, where the 'special' numbers are more pronounced

Although some tweaking appeared to help the previous issue before the XOR as applied, a second problem because apparent: a slight non-uniform distribution of energy in the FFT. Whether this is of any major significance is open for discussion.

Slight decrease in energy toward the right

In an attempt to overcome the first problem above, a differential encoder (mod 2) was added prior to the re-packing of the LSB of ADC samples into the 'noisy' byte. The purpose was to apply the modulus operator to the LSB because it had a tendency to pass through particular values in a very small range (due to the sampled noise). Applying mod 2 to the entire sampled byte was sufficient as only the LSB is of interest, and it would serve to smooth the aforementioned non-unformity, thereby increasing the bit's entropy.

However, this had an unintended and negative effect: 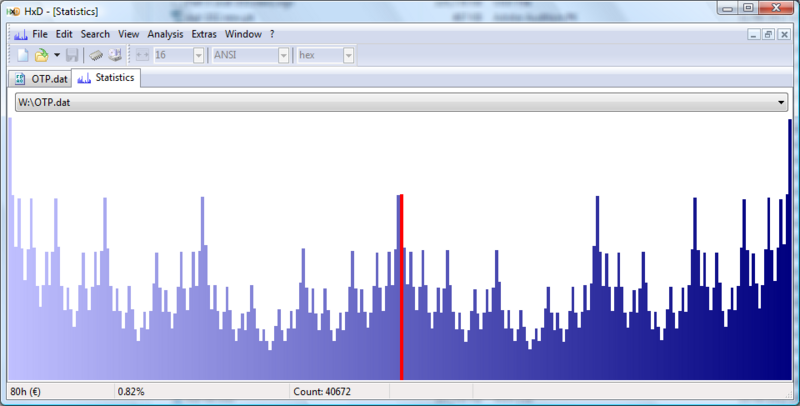 Mirrored distribution about the midpoint favouring powers of two

A byte of all 1s or all 0s are favoured equally, and then (equally, but with less probabilty than before) one less than powers of two up to 127, after which the distribution is mirrored. Application of mod would have generated more extended sequences of 1s and 0s, therefore bringing about the patterns of numbers just described that led to this worrying distribution.